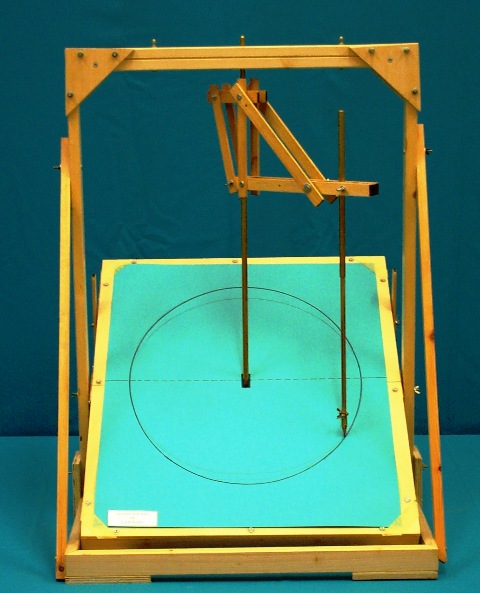 Leibniz was extremely interested in Cartesius theories and between 1675 and 1676, during one of his travels to Paris, he requested to copy part of the unpublished documents of the French philosopher. After Leibniz deth, Cartesius\' documents copies where kept at the royal library of Hannover and ignored for long time. Nevertheless, in 1859 count Foucher de Careil found them and pubished them in two volumes (Oeuvres inèdites de Decartes, ed. Auguste Durand, Paris) together with other documents. The critical edition by Adam - Tannery was only publisehd 50 years later, in 1909. With the title Cogitationes Privatae, Foucher de Careil published a set of notes, written by Cartesius wrote in 1619 in latin, where a very short description of how to build a compass to draw ellipses can be found.

Referring to the picture above, ACDE is the compass, A a fixed point, DE rotates remaining parallel to CA and scrolls up and down through point D, E is the tracer which slides on an inclined plane. In this configuration DE is the cylinder generatrix, the plane through A and S is the secant plane and the section is an ellipse. This property was already well known to Archimedes while Sereno Antinoense wrote a whole treaty about it.